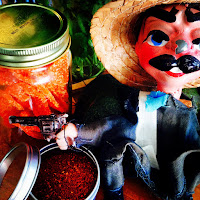 It's been over a year since we've posted here.  Granted I was walking the entire length of the west coast, from Canada to Mexico with the fuzzybutts most of last year.  I've missed you, Mano, and it's time to get back to the kitchen and to talk about our travels.

The most recent of which was Madison Wisconsin. My Tex-Mex Muse, El Guapo, & I were recently there to cook up some creative cuisine for the VIPs of the Puppy Up Walk.

This being only my third trip to the Cheesehead state I had to get a better sense of the local flavors and fares and visited a few restaurants first; Pig in a Fur Coat, The Tipsy Cow & The Old Fashioned.

When El Guapo & I were asked whether we wanted our cheese curds 'fried or squeaky', well there just isn't an exact Spanish translation for squeaky as chillona means screaming.  Not surprisingly El Guapo pulled out his pistola.

Ultimately we came up with a menu for Team Madison that fused midwestern meats and cheeses with what we do best.  Here are a few highlights:

Fried Soup.  Immediately upon my research that Beer Cheese Soup is a solid staple up here, my instinct was...  El Guapo - let's deep fry it.  Served in a shot glass and topped with a roasted garlic green chili sour cream sauce it was absolutely successful.

The final course was a traditional butter burger but infused with CBD 17, my own blend of 17 spices and herbs.

It was a tremendous honor to cook for Team Madison WI and I hope El Guapo and I did a inspirational job of translating Tex Mex to Wisconsin.  Until Next time...

Puppy Up and Chow Down.