As a cook and eater of extraordinary extent, it seems incumbent on me to celebrate the culinary creations of other chefs. And I'll chronicle those exploits here.

In route to NYC to fund a cancer study, the fuzzybutts and I pitched tent at a North Fork campsite in Greenport Long Island.  Late in the day, long in our travels, and after wine sampling at a few of the vineyards, I just wanted a tasting menu and for the first time, Yelp took us to that place.

Chef Noah gets that little bites are the trend, perhaps the future of the dining experience.  The tired old equation of appetizer + entree + dessert just doesn't add up anymore.

Noah's is a destination place and not only for foodies.  Deviled eggs are a new inspiration for me.  Thanks, Chef. 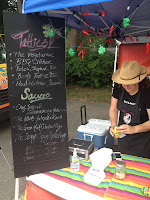 Clinton 350.  Wow. What a great event.  So proud of the people in my hometown for coming out and celebrating the birthday of our great town.  And boy, did they come out!!

I do believe the Ladies of Clinton enjoyed watching Chef Big Dog sing, dance and shake the maracas each time a "Booty" Tattie was ordered.  We kept people smiling all day long.  Our tent was the most festive looking and the most fun!  The queue, the feedback and repeat customers proved that our Tatties were the best food there.

Thanks to all the Clinton folks who came out, the Food trucks who kept feeding us, and my favorite neighboring concession, John at the Bartenders Express, who kept the Magic Margaritas appearing on our freezer.

Lastly, and most importantly, thanks to the Chef for the amazing job he did frying and entertaining.  You make me proud!

CBD's Notes 1: It was a great day indeed and I filmed a few hours of the historic occasion for what comes next.

CBD's Notes 2: It's now the 'Shake Murphy's Booty Tattie' accompanied with the Maracas!

CBD's Notes 3:  Thanks for making me do this festival Chef Lucky
Posted by Chef Big Dog at 5:07 PM 1 comment: 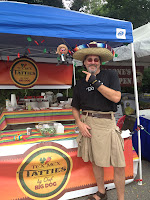 Yesterday, at the Clinton 350, was the first time I truly felt like a Chef.  Yes, I've been cooking my heart and soul out since I started this culinary adventure in April, concocting new recipes and concepts to keep us on the cut, and at the Connecticut Wine Festival and the Celtic Rock, the customers loved, loved our tatties.

But Clinton 350 was an entirely new experience I just wasn't prepared for.

First of all, I freely admit I was less than enthused about going.  The competition was fierce for a small town festival, from BBQ to burgers, French fries, lobster rolls, pizza, and grilled cheese in giant food trucks I suspected we'd get lost since after all, we're just 2 guys with a fryer and a crazy, Tequila drinking Mexican marionette.

But I got schooled!

I can't recall the exact inflection point in my perspective Saturday but everyone there was so receptive to our culinary concept and we were warmly and well received early on in the day.  So we started frying up tatties for our fellow chefs to share the love, love we have for food and they reciprocated in sharing their wicked good wares.

The first was The Cheese Truck out of New Haven.  If you're anywhere within a 100 mile radius, their Avocado Bacon grilled cheese sammich is so frikkin good and it has this mustard seed relish that ties the whole dish together like the Dude's rug to his living room.

Next up was Fryborg whose concept is the age old French fry with a side of some serious freakiness.  We sampled their fried egg fries with Sriracha Mayo and it was all kinds of good.

It was great to be in the presence of fellow chefs, Chef Jonathan with Fryborg, Chef Jason the Cheeseman, Chef Benjamin with Cowabunga, who are all trying to create a wholly unique and new culinary experience.  And to get their feedback on our Tex-Mex Tatties.

The pursuit of and path to greatness in whatever your life endeavor, is paved with self doubt and uncertainty but for the first time I felt like I was part of a community and, although still small and new to it, that I have earned a seat at the table. 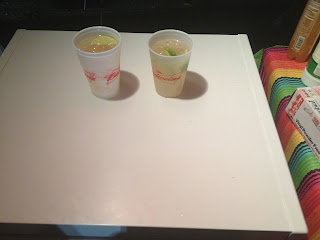 We also fried up some tatties for the lovely ladies with Bartenders Express and towards the end of service, two Margaritas magically appeared on top of our freezer.  And they kept coming!

We suspect that the proprietor, John, was the clandestine culprit.  Maybe he wanted to keep us hydrated  or maybe he fancied Chef Lucky - I'll post her version of yesterday's festivities in the next blog.

But that figuratively and literally topped off the evening and the end to a great event and season for Tex-Mex Tatties by Chef Big Dog.  Thanks to everyone for a successful and enlightening day.

My duties as a philanthropist kick in next week as the Executive Director of 2 Million Dogs, Ginger Morgan, comes up to New England and we have some cancer studies to fund.  After that, we're traveling to the Twin Cities for VCS and then on to Chicago for their Puppy Up! Walk.

But I'll be cooking and creating throughout our travels.  Stay tuned for what comes next from Chef Big Dog!