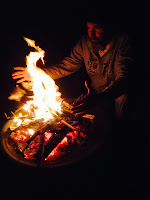 "I am of old and young, of the foolish as much as the wise,

As my life's timepiece takes another tick, I cannot help thinking of Walt Whitman's Song of Self.

Today is my birthday and it'll be spent sounding my barbaric yawp tho not over the roofs of the world, but in the sidestreet eateries and backally barrooms of NYC.

As of now, here's the 24 hour culinary itinerary

Afterwards, walking the streets of the city as my holiday season cannot be without it.

Then tapas Japanese style and some serious sake at Sakagura

For digestifs, there's a place that seems all too apropos to the 'Song of Self' and that's Lovers of Today - a speakeasy and, from my understanding, a purveyor of creative, uncommon, and seemingly righteous cocktails.

And to top off the nite I really wanted to go to Fatty Cue Brooklyn for some sort of 1AM pork, bacon, naughty grease goodness but from what I'm hearing, the servers are self bloviating buttholes so we'll see.

To sum up my culinary adventures in the city I'll go to La Esquina, a restaurant renown for its simple, beautiful Mexican dishes.
Posted by Chef Big Dog at 11:01 PM No comments: