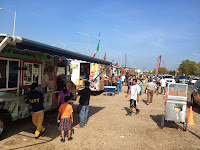 I've oft griped of the paucity of authentic Tex-Mex-ish food in the Northeast but apparently, I was looking in the wrong place. 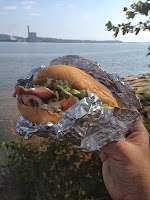 But you can't blame me.  Who would've thought that the home to Yale University could also be home to anything real and unpretentious?  But since I walked through New Haven, it now makes sense.

Beyond and beneath the ivy walls, it's a predominately blue collar, salt-of-the-earth port town, not unlike so many on the old Boston Post Road in Connecticut. Full of color, flavor, and people who, if they only have $10 to spend on food, demand that it's down and outright authentic. 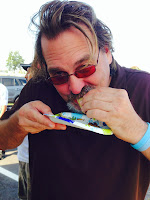 I found that in a row of food trucks along Long Wharf CT.  When I posted this photo on my FB page, someone remarked that they passed by it for 16 years and never stopped for reasons which elude me.

Look, I'm a foodie and an anti-foodie all rolled up in a Big Dog bun but for Christsakes - support your local culinary community.  And if a sense of social responsibility doesn't convince you, take a gander at that gigantic torta mexican styled cuban sammich.

And the carnitas, and the alambre with cactus taco, too.